Home Invasion & Attempted Murder. Give us our human rights, give us our guns back. 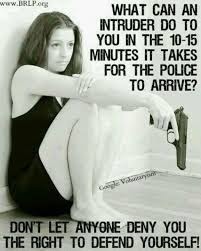 https://au.news.yahoo.com/vic/a/38055974/gang-of-thieves-attempt-to-run-down-mum-baby-after-stealing-car/
The government claims we do not need guns for self defence. I beg to differ!!!

It is even illegal in Australia for law abiding citizens to purchase or carry pepper spray or tasers. I say forget about the pepper spray & tasers, we want to be legally allowed to purchase & carry firearms for the purpose of self defence & for the defence of our families. This is a human right that we Australian citizens are being denied by our government.

Gun confiscation was never anything to do with the safety of Australian citizens, the fact that there have been no mass shootings since the Port Arthur massacre has nothing to do with it. People are killing other people with knives, such as the massacre in China, & the terrorist attack in London, no guns were used in these killings. But we NEED to be able to use a gun for our defence, do you really want to have to get into a knife fight or defend yourself with just your fists against a bigger person? This is not sensible or practicle.
Posted by Keith at 4:49 PM