Thoughts For The Week.

Defence Industry Minister Christopher Pyne says he wants Australia to become a major arms exporter on par with Britain, France and Germany and use exports to cement relationships with countries in volatile regions such as the Middle East. To read in full click the above link.  http://www.smh.com.au/federal-politics/political-news/defence-industry-minister-christopher-pyne-wants-australia-to-become-major-arms-exporter-20170715-gxbv4m.html

While spending 26 Billion dollars a year on our near non-existent military forces, he has a huge import budget but as he has few people, (all chiefs and no Indians) involved, no one will set up a factory, spend millions on research and development, spend more millions on tooling and staff recruitment to offer a product to equip a few battalions, a few thousand products to a few thousand men. Then Australia would have to compete
with Austrian plastic fantastic firearms and Chinese uniforms. Christopher Payne “IS DREAMING”, If he wanted to do anything seriously he would return to the 1903 Defence Act which encouraged the Militia the NRA Rifle Clubs which sustained the Australian Military Forces through two World Wars, Korea and Vietnam Wars. The Defence Ministry subsidised the purchase of the battle rifle of the time, the Lee Enfield .303, subsidised the ammunition and made local rifle ranges in every small town and hamlet in Australia. The Club Captain was the O.I.C. in charge of discipline and under the Defence Act of 1903 could call out the Militia for Aid to Civil Powers or in Defence of the Realm. Every man, or member had to take the Oath of Allegiance and was exempt from all State licence requirements.  He or she was a sworn in member of the Militia, part of the Defence Force of Australia, these hundreds of thousands of shooters created a service industry and sent trained shooters into the battalions of the AIF and the Chocolate Soldiers who stopped the Japanese in New Guinea and ultimately saved Australia. For a very small investment Australia was given a purpose, and a market for its Lithgow Rifles, its ammunition manufacturing and led the world in designing rifle sights, spotting scopes and proper cleaning equipment.
This market was again boosted by the Defence Act of 1909 which heralded a universal military training system for 18-25 year old males in operation in Australia from 1911-29. That was, all Australian boys aged 14-18 were compelled to train as cadets, as a type of apprenticeship to the adult army. After four years in the Army Cadets, they remained members of the Militia the NRA rifle clubs until they were 25. This was a significant social and military activity. Hundreds of thousands of cadets were placed in uniforms and graced the drill halls, and rifle ranges that had been newly built in almost every city, town and village of the nation.

Cooroy Rifle Club 1914, produced soldiers like the one below. 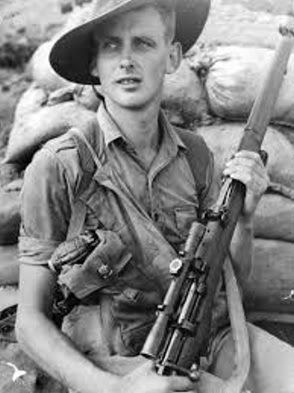 The Minister for Defence, Sir William Glasgow said he believed that Australia’s war effort, had been based on the old volunteer and militia system, and which without, it could not have assumed the proportions that it did.
Nothing has changed, we have the same materials, the same young people, we have the room for the rifle ranges, and training area’s, if Defence Industry Minister Christopher Pyne was half serious, if he wanted to create a defence industry, its like the chicken and the egg, he has to create our own Defence system, its fine having the latest electronic gadgets but to have a defence we need to look to Israel and Switzerland defence, we have to get the population involved and interested. If the Australian government encourage and supported a Militia/ rifle clubs using the equipment of the day, competition would develop invention, the numbers involved would create a market for military goods. Already we have a structure of Service Rifle Clubs, we used to shoot practical rifle competitions, prior to our governments disarmament hysteria in 1996. Why wouldn’t the shooters above assist in producing the soldier below?

Just a half a billion of his current import budget would make a massive change to our society and give a huge purpose to a large amount of young men and women who do not want a life cooking the Colonels Chicken, or cleaning tables at Maccas. They would love jobs in the military, militia or a defence industry. It needs to happen sooner rather than later, the world is not a happy place.
………………….
URGENT not much Time Left to Change the mind of your local State and Federal MP.
NSW has already passed and started Registration of Ammunition, in compliance with the National Firearm Agreement, those traitorous Police Ministers and their Yes-men, unanimously agreed to impose this in every State of Australia.

The 660,000 licenced shooters of Queensland, (growing numbers at 35% per anum) do not have much time left to raise the alarm and tell all, that the new NFA (National Firearm Agreement) that our Labor Premier has ready to put before parliament, does not just alter the categories of Adler Lever Action shotguns, but its real intent is to register and limit all ammunition sales, creating another huge empire of public servants, recording, reporting, accessing and restricting your right to purchase ammunition. This will impose a huge burden on every shooter and on every point of sale, that has to employ people to register and report that information to the State.
Limiting Ammunition when Australia is being encroached upon, the word ‘invaded’ could be used, by 100 million feral pigs or more, they double their numbers ever year, so the CSIRO tells us. We also have huge external defence problems that would by any sensible government encourage production of ammunition and firearms.
Prices will rise and it will cause a black market in ammunition to thrive. More police will be needed to spy on shooters and gunshops, so the Police Union and bureaucracy will continue to increase in size. Criminals, who have no shortage of money will have no problem acquiring ammunition, the government knows this and so does any rational thinking person. This is just another small step with a big government boot to suppress the freedom of the individual.
Other sections of this NFA (National Firearm Agreement) (that no one, but government agreed to) is in changing the current requirement of collectors firearms and heirlooms, from temporary inoperable to permanently inoperable. Instead of a firing pin removal, or a trigger lock, these ancient masterpieces of invention that have huge emotional value to families will have to be welded up into a solid lump of junk.
So please inform your local members of parliament of every party. Emphasise the fact that you and your friends and families will all vote against them at the next election if they do not oppose these further impositions. They do not have to be told which way you voted last time. All federal politicians have already given their assent except David Ean Leyonhjelm so all accept him must be told that you will not vote for them.
Even ‘One Nation’ has these words in their policy “maintain the general principle of the National Firearms Agreement in restricting access to high powered, high capacity firearms.”
More than likely they have never read the NFA, but they have to be told by individuals. Don’t wait for your association to do it for you. Its numbers that count, every vote down, and given to another Independent means that they have to find two other votes to make up for that loss.
When you visit, your local member, he will more than likely blame everyone but himself, he will start with the opposition and then when he realises you know that both major parties have given bilateral support for the agreement. He will even look to blame his own party for a way out, or an excuse.
Just tell him to stand as an independent and proclaim his own policy,
A. For the individual right of law abiding citizens to own firearms,
B. To end long arm registration, to allow semi autos and pumps, and
C. Ensure that all law abiding citizens can use the Right of Self Defence as a reason to obtain the firearms that they believe are suitable for this need.
Remember if a Snap Election is Announced and you do not have time to vet your local candidates  put Labor last followed by the Greens and other major parties that are standing. Only know them by what they produce. Ron.
……………………………………..
Economic Security Equals Personal Security.
As this Bulletin is concerned with our Freedoms, our Rights and our Security, its time to take a broader brush and give a lot of thought to our Economic Security.
WHY DO WE HAVE STARVATION IN A LAND OF PLENTY?
Why do we have an economic system that turns the government into an end, instead of a means, and the individual into a means instead of an end?
What has happened to the Constitutional demand that all institutions exist to serve the individual, that the State exists to serve its citizens? Now it appears that the only reason for individuals to exist, is to serve the State.
If it moves, tax it. If it keeps moving, regulate it. If it stops moving, subsidize it. The problem is not that people are taxed too little, the problem is that government spends too much. —Ronald Reagan.
Real economic security would mean that individuals in society must have sufficient purchasing power to provide effective demand in order to consume what they produce. Absolute economic security resides in the possession of a sufficient income at all times to buy the goods and services without which there would be no demand, no production and no payments of wages.

Government doesn’t produce, it only consumes and produces a large negative effect. Here are some of the reasons we have poverty amongst the plenty.
In 2015-16 it took $405.4 billion in taxation, but its total expenses for 2015-16 were $434.5 billion, so the balance was a further debt of 29.1 billion. Just paying the interest on that is taking spending from our future earnings, or the earnings of our children.
In 2012 Australian Households spent a total of $642 billion on general living costs but in the same year only earned $521.3 billion in wages and income. So again the balance goes in a $120.7 billion dollar debt which has to be paid from our future earning.
The manufacturing industry in Australia has declined from 30% of Gross Domestic Product in the 1960s to 12% of GDP in 2007. Yet in 2012 we still donated $7.7 billion in Foreign Aid.
From the figures above we can understand that although Australians earn over a Trillion dollars annually, their government masters remove over $400 billion in taxation which is used to pay their governments interest on its debts. (According to a report released in October 2013, the nation’s poverty rate increased from 10.2 per cent to 11.8 per cent, from 2000/01 to 2013.)  The above general formula is endemic to most countries in the Western World, the governments are run in debt to the banks and so to are 90% of their populations.
There is no single cause operating in the western world today which is of such importance and is so fraught with the possibility of world disaster, as is the disparity between purchasing power and prices. The longer it continues, unchecked the more certain and with more speed approaches either Depression, or War, or Both.

(Please read the rest of this article)
http://www.foaa.com.au/economic-security-equals-personal-security/