UN Drastic Climate Change Warning. We Are Literally Running Out Of Time!!! 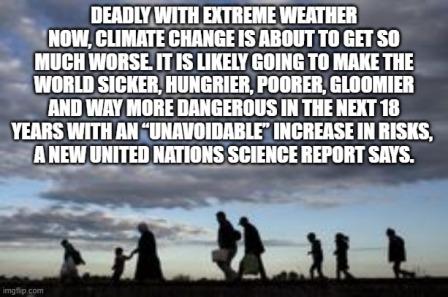 No One Stopping Climate Change.

The world is not really doing anything to stop or slow climate change, it has been put in the “too hard to do” basket. The world is still burning fossil fuels, those that claim to have reduced drilling for oil & gas such as America are in fact purchasing fossil fuels from overseas. The world is still destroying natural forests & wildlife habitats, some forests such as the Amazon forest are now creating more carbon emissions that they absorb. Climate change is now causing “Feedback Loops”, that means that climate change is causing droughts which in turn is killing trees, it is melting the ice & creating “Black Water”, it is melting the permafrost & releasing methane.
Alternate energy is not carbon neutral; ALL alternate energy sources are TOTALLY reliant on fossil fuels for their manufacture. Electric vehicles are the same; they cannot be produced without burning fossil fuels.

We have perhaps 10–20 years before society collapses, this will be catastrophic; this will be TEOTWAWKI. Today’s children may not survive climate change. If you are 40 years of age or younger, you need to start prepping now. There is going to be a lot more frequent & severe disasters worldwide in the build up to societal collapse. The cities will be the worst places to live in.
Regards, Keith.

I think what needs to be done to stop climate change is just too big for governments to handle, & the majority of people in the cities do not want to have to change their environmentally damaging lifestyles. It is easier for the governments to wait until disasters happen, & then put their energies into dealing with those individual disasters. Having said that I must point out that the Australian government never did finish helping the people after the last catastrophic climate change wildfires.
I believe the only way to stop climate change is to change society to function on a more primitive technology, & to stop the burning of fossil fuels completely & immediately. This would be a tremendous task, but I think it is the only way to save humanity from societal collapse, total chaos leading to many deaths & eventually possibly the extinction of the human race within the next 80–100 years.

MIT's 1972 prediction of society collapsing could happen by 2040