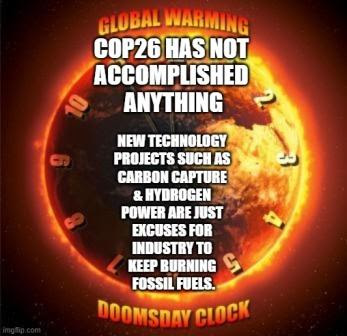 I think what needs to be done to stop climate change is just too big for governments to handle, & the majority of people in the cities do not want to have to change their environmentally damaging lifestyles. It is easier for the governments to wait until disasters happen, & then put their energies into dealing with those individual disasters. Having said that I must point out that the Australian government never did finish helping the people after the last catastrophic climate change wildfires.
I believe the only way to stop climate change is to change society to function on a more primitive technology, & to stop the burning of fossil fuels completely & immediately. This would be a tremendous task, but I think it is the only way to save humanity from societal collapse, total chaos leading to many deaths & eventually possible the extinction of the human race within the next 80–100 years.

What Can We Do Now.

Well we, the people, have two choices as I see it, we either have to organize much larger strikes & disruptive protests, & I mean MUCH LARGER! Or we start seriously prepping for the coming disasters. Being prepared may not save us, but at least we will hopefully be prepared enough to survive anything that can be survived. IF society were to collapse early, say within the next decade, then we might stand a much better chance of survival, as this would likely be teotwawki, & hopefully it would seriously affect the use of fossil fuels.