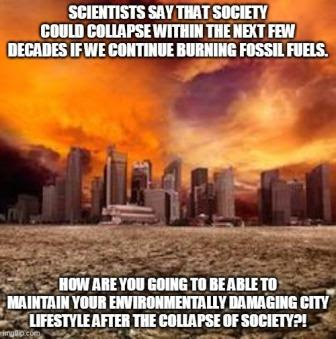 The trouble is that city life continues at it’s hectic pace, some foods may become scarce, but that is because of the floods they say. The floods? Well that is just bad weather, & so life goes on with the occasional blackout, they keep burning fossil fuels & climate change accelerates, but the city is cut off from nature except for the occasional exhaust fumed polluted city park. Nothing changes much, & nothing will, except if something drastic happens, something catastrophic, but by then of course it is way too late to do anything about it.

So we have maybe 100 years before our extinction, or is that now 30 years? Oh someone in the know predicts it could only be 10 years!!!!!!! And yet even with these dire warnings, the world continues burning fossil fuels, talking about “offsets” that don’t actually exist, talk of “emission reductions”, but no talk of stopping the burning of fossil fuels completely & immediately, which is what it would take to save the human race, save our children from a climate change death! This is how civilizations have fallen in the past, the signs are all there, the warning are frequent, but not enough people are paying attention. The city people do not want change, they don’t want society to change, they want someone to stop climate change without affecting their city lifestyles. They want to keep their petrol & diesel vehicles & their environmentally damaging city lifestyles. They simply can’t grasp the fact that climate change can not be stopped now, it is too late. We may be able to slow climate change, me may even be able to avoid societal collapse & our early extinction, BUT not if the world continues to burn fossil fuels, not if we continue to destroy our native forests & wildlife habitats. IT SIMPLY CAN’T BE DONE!!!

So for those of you who understand what is happening, & what is going to happen, start at least thinking about your survival & the survival of our children. Because we are running out of time fast. 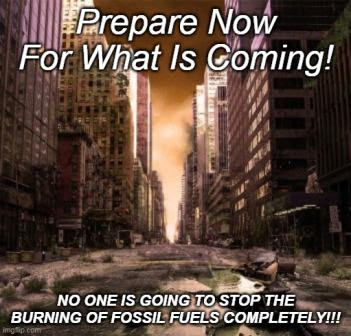