It Was Only A Matter Of Time ! A Major CSG Blowout !!!! Also, check out the links. 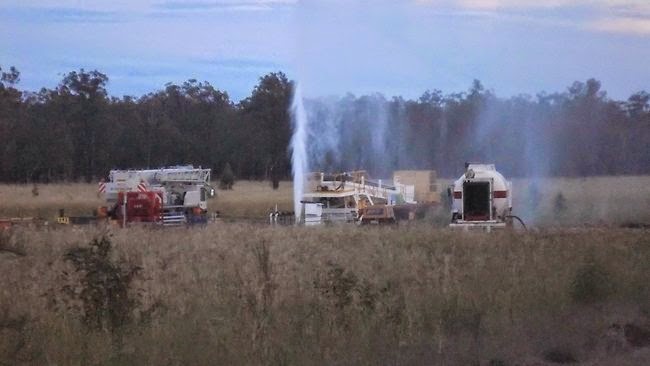 3 hrs ·
NEWS FLASH, NEWS FLASH. You wont see this in Des houghton of the couriermail articles, or the Chimpchilla News. Nor will you see it on lamestream media. There has been a major CSG incident near Chinchilla. An incident involving both Arrow and Origin so I have been told. It involves the blowing of an aquifer, a water bore blowing out very impressively so i am told. The CSG compliant unit has attended and it is reported to me, they have told the Gas Co's to fix the problem. Of course there is no make good for this and monetry compensation is the only solution. I have been informed the figure of $1,000,000 is the proposed compensation. But my concern is will $1,000,000 silence this issue, is that all the future of our nation is worth. Also if it is as it has been reported to me, a whole of aquifer damage, what about all the food that was going to be grown from this aquifer. What about all the other farmers in the area who rely on this aquifer to remain productive. My personal opinion is it is TIME FARMERS stood up and said, MONEY is not the amswer, shutting this industry down is the answer. Instead I suspect the monetry value will be all that is required to silence this issue, destroy the lives of numerous productive farmers as the problem spreads, and all the while slimy no account journalists will continue to spread the co-existence bullshit. So how much truth is in this allegation, enough for me to hear it from both the CSG industry and farmers alike. Will I pursue this, no, I dont use underground water, our bore is already poisoned, both the industry and the government have covered that up. This claim is for FARMERS who will be impacted to chase up, for any journalist if there are any left in lamestream to follow up. It is common knowledge. For those of you who dont live in a gasfeild, you will not realize this industry leaks information at an alarming rate, my personel belief is that people working in the industry are just trying to relieve the burden on their soul by leaking information. So has anyone got the balls to follow this up, probably not, but we are talking an aquifer, not a water bore, we are talking an aquifer.
http://www.couriermail.com.au/business/coal-seam-gas-well-blowout-near-dalby/story-e6freqmx-1226060860912