A Bill Of Rights Proposal For Australia. 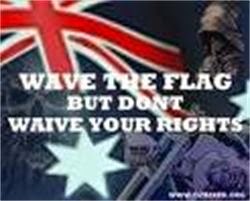 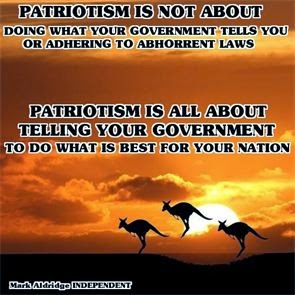 Legislation continues to be written that takes away the rights we assume we had, I say give all Australians a bill of rights, and teach it in the schools, while we are at it make it retrospective, so here is my "bill of rights collation for Australia" doubt I have it spot on, but lets debate what change is necessary.
Mark Aldridge Independent Candidate

4. Human dignity Everyone has inherent dignity and the right to have their dignity respected and protected.

5. Life Everyone has the right to life.

6. Freedom and security of the person

2.      Everyone has the right to bodily and psychological integrity, which includes the right ­
a.     to make decisions concerning reproduction;
b.     to security in and control over their body; and
c.     not to be subjected to medical or scientific experiments without their informed consent.

9. Freedom of religion, belief and opinion

1.      Everyone has the right to freedom of conscience, religion, thought, belief and opinion.
2.      Religious observances may be conducted at state or state-aided institutions, provided that ­
a.     those observances follow rules made by the appropriate public authorities;
b.     they are conducted on an equitable basis; and
c.     attendance at them is free and voluntary.

1.      Everyone has the right to freedom of expression, which includes ­
a.     freedom of the press and other media;
b.     freedom to receive or impart information or ideas;
c.     freedom of artistic creativity; and
d.     academic freedom and freedom of scientific research.
e.     Freedom to impart information of public interest.
2.      The right in subsection (1) does not extend to ­
a.     propaganda for war;
b.     incitement of imminent violence; or
c.     advocacy of hatred that is based on race, ethnicity, gender or religion, and that constitutes incitement to cause          harm.

11. Assembly, demonstration, picket and petition Everyone has the right, peacefully and unarmed, to assemble,        to demonstrate, to picket and to present petitions.

14. Citizenship No citizen may be deprived of citizenship.

15. Freedom of movement and residence

18. Environment Everyone has the right ­

1.     No one may be deprived of property except in terms of law of general application, and no law may permit                   arbitrary deprivation of property.
2.     Property may be expropriated only in terms of law of general application ­
a.     for a public purpose or in the public interest; and
b.     subject to compensation, the amount of which and the time and manner of payment of which have either been            agreed to by those affected or decided or approved by a court.
3.     The amount of the compensation and the time and manner of payment must be just and equitable, reflecting             an equitable balance between the public interest and the interests of those affected, having regard to all                     relevant circumstances, including ­
a.     the current use of the property;
b.     the history of the acquisition and use of the property;
c.     the market value of the property;
d.     the extent of direct state investment and subsidy in the acquisition and beneficial capital improvement of the              property; and
e.     the purpose of the expropriation.
4.     For the purposes of this section ­
a.     the public interest includes the nation's commitment to land reform, and to reforms to bring about equitable                access to all Australias natural resources; and
b.     property is not limited to land.
5.     The state must take reasonable legislative and other measures, within its available resources, to foster                     conditions which enable citizens to gain access to land on an equitable basis.
6.     A person or community whose tenure of land is legally insecure as a result of past discriminatory laws or                  practices is entitled, to the extent provided by an Act of Parliament, either to tenure which is legally secure or           to comparable redress.
7.     Parliament must enact the legislation referred to in subsection (6).

1.      Everyone has the right to have access to adequate housing.
2.      The state must take reasonable legislative and other measures, within its available resources, to achieve the             progressive realisation of this right.
3.      No one may be evicted from their home, or have their home demolished, without an order of court made after             considering all the relevant circumstances. No legislation may permit arbitrary evictions.
4.      Any Australian citizen has the right to a jury of their peers regarding dispute of property.

1.     Everyone has the right to have access to ­
a.     health care services, including reproductive health care;
b.     sufficient safe food and water; and
c.     social security, including, if they are unable to support themselves and their dependants, appropriate social                assistance.
2.     The state must take reasonable legislative and other measures, within its available resources, to achieve the              progressive realisation of each of these rights.
3.      No one may be refused emergency medical treatment.

24. Language and culture Everyone has the right to use the language and to participate in the cultural life of their           choice, but no one exercising these rights may do so in a manner inconsistent with any provision of the Bill of           Rights.

1.     Everyone has the right of access to ­
a.     any information held by the state; and
b.     any information that is held by another person and that is required for the exercise or protection of any rights.
2.     National legislation must be enacted to give effect to this right, and may provide for reasonable measures to               alleviate the administrative and financial burden on the state.

28. Access to courts Everyone has the right to have any dispute that can be resolved by the application of law decided in a fair public hearing before a court or, where appropriate, another independent and impartial tribunal or forum including the right to a jury of their peers.

1.      The rights in the Bill of Rights may be limited only in terms of law of general application to the extent that the             limitation is reasonable and justifiable in an open and democratic society based on human dignity, equality               and freedom, taking into account all relevant factors, including ­
a.     the nature of the right;
b.     the importance of the purpose of the limitation;
c.     the nature and extent of the limitation;
d.     the relation between the limitation and its purpose; and
e.     less restrictive means to achieve the purpose.
2.      Except as provided in subsection (1) or in any other provision of the Constitution, no law may limit any right                entrenched in the Bill of Rights.
3.      Any previous legislation or law that effects a limit on this bill of rights will be invalid to the extent of such effects          applied.

4.      Any legislation enacted in consequence of a declaration of a state of emergency may derogate from the Bill of          Rights only to the extent that ­
a.     the derogation is strictly required by the emergency; and
b.     the legislation ­
i.       is consistent with the Australia’s obligations under international law applicable to states of emergency;             ii.       conforms to subsection (5); and
iii.      is published in the national Government Gazette as soon as reasonably possible after being enacted.

3 Equality With respect to unfair discrimination solely on the grounds of race, colour, ethnic or social origin, sex religion or language
4 Human Dignity Entirely
5 Life Entirely
6 Freedom and Security of the person With respect to subsections (1)(d) and (e) and (2)(c).
7 Slavery, servitude and forced labour With respect to slavery and servitude

32. Enforcement of rights Anyone listed in this section has the right to approach a competent court, alleging that a right in the Bill of Rights has been infringed or threatened, and the court may grant appropriate relief, including a declaration of rights. The persons who may approach a court are -

33. Interpretation of Bill of Rights

1.     When interpreting the Bill of Rights, a court, tribunal or forum ­
a.     must promote the values that underlie an open and democratic society based on human dignity, equality and            freedom;
b.     must consider international law; and
c.     may consider foreign law including the UN declaration of human rights
2.     When interpreting any legislation, and when developing the common law or customary law, every court, tribunal          or forum must promote the spirit, purport and objects of the Bill of Rights.
3.      The Bill of Rights does not deny the existence of any other rights or freedoms that are recognised or conferred            by common law, customary law or legislation, to the extent that they are consistent with the Bill. Previous                Legislation introduced at either State or Commonwealth level will be deemed invalid to the extent that it                      restricts any rights contained in this bill.

Now lets hope for some debate, this is a collation of several bills around the world with a little Australia added, and I am sure more change is necessary, in fact like our constitution it must be the result of Australians working together through worthy representatives from a grass roots level.

No where here do I see a direct mention of the right to self-defence by any means ! At this present time, as far as I am aware, only police and security officers can defend themselves against a knife or axe with a firearm. Ordinary citizens can be imprisoned for using a firearm for self-defence purposes.
Keith.
http://www.markmaldridge.com/BILL-OF-RIGHTS-FOR-AUSTRALIA.html
Posted by Keith at 12:15 PM