CLIMATE CHANGE WARNINGS From Climate Scientists Being Ignored, & We Are Running Out Of Time!!! 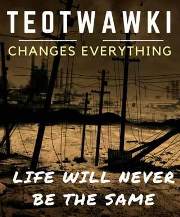 Dire warning from climate scientists & the UN have become more frequent & more frightening, & yet the majority of people are ignoring these warnings. Within the next few decades, we could see the collapse of society/civilisation, then we will experience TEOTWAWKI, & from then on life is going to be pretty bad right up until the probable extinction of the human race within the next 100 years.
How can we avoid these apocalyptic events? Only by stopping the burning of fossil fuels completely worldwide. Society needs to change, we need to go back to living an 18th-19th century lifestyle. We need to be more self reliant & sustainable, & this is not going to happen whilst society remains the same.
I know many Preppers & Survivalists look forward to the collapse of society, because they hope that this will bring more freedom, but it will also be a very hard time & a dangerous time. Yes if society were to collapse within the next decade, & it were to stop the burning of fossil fuels, then some of us may yet stand a chance of surviving, but the longer the world continues to burn fossil fuels, the more our chances of survival diminishes.
If you can afford it, now is the time to move off grid if you can, get out of the city limits. Some scientists are predicting a sudden collapse, where as up until now our eco-systems have been collapsing slowly. The majority of people either assuming someone else will save us, or not believing at all, or simply burying their heads in the sand. But time is running out, & if we are to help ourselves & our families survive a little longer than the majority, then we must start preparing now for what is coming. I know we are limited in what we can do with the way society is at present, but we must make sure that we are as self reliant & sustainable as we possibly can be.
Keith.