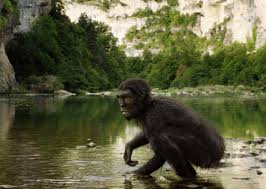 A scene from Lucy.
How did we manage to get from this to the scene below? 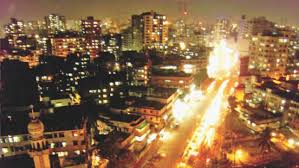 I watched a movie last night called Lucy, in this movie was an image of early man drinking from a crystal clear lake. The next image was of a modern city, the contrast between these two images was stark & striking & brought home to me how far we have come since early man, & the damage we have done to the natural environment. If we could have stayed in those early years of evolution, our world would likely still be pristine, no chemical pollution, no polluted air, & no anthropogenic global warming & climate change caused by the burning of fossil fuels. Thinking of that now makes me feel like I have an empty space inside me, how on earth did we manage to get from that hunter gatherer era to the devastating city lifestyle era of today?

I don’t have the answer, but I do have another question, what is to stop us from going back to a more civilized primitive time? For over 20 years my wife & I lived an 18th century lifestyle, & in that time we raised four sons. Life was certainly harder, but it was fun too. Now we are still living off grid, but now we have solar power & a fridge/freezer. But we still grow our own food; we still dry & pickle our produce.

I don’t think we have much longer before society collapses, people are talking about reducing carbon emissions, about using carbon credits, about meeting carbon targets by 2050. I am not sure that we have that much time, to wait for 2050. I think that we don’t have time for reductions; we need to stop burning fossil fuels now, change society before it collapses. I know, this will cause chaos, but how much more chaos do you think we will see if we wait for society to collapse, when we will no longer have the option of some control?

It is of course not going to happen, society will collapse, & I think a lot of people in the cities are going to die. Perhaps it will turn out differently, perhaps we will see a mass migration of climate refugees to other countries, but will these other countries be any better off as climate change accelerates further? Perhaps our corrupt government has a plan, more control, dictatorship,  a dystopian lifestyle in a dying world. Whatever happens, it is not going to be good, & can only end in an early extinction of the human race. But who knows, something unforeseen may happen, some of us who have prepared may yet survive.